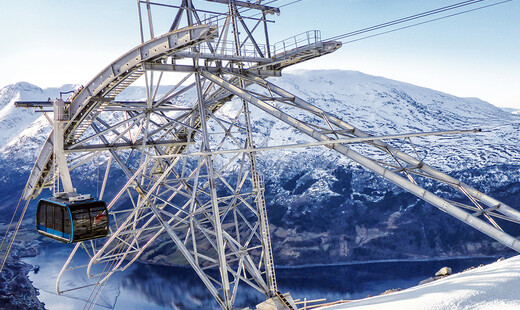 At the touristic end of the Nordfjord, Garaventa has built the spectacular Loen Skylift. A ride on the new tram provides an impressive panorama. It begins directly on the fjord and takes just five minutes to climb over 1,000 vertical meters from the Norwegian village of Loen up to the 1,011-meter Mount Hoven. The lower terminal is ideally situated within easy reach of a landing stage for boats bringing tourists from visiting cruise liners. The new tramway has two sets of track ropes and no track rope brake. Each of its two cabins can carry up to 45 passengers to the popular viewing point. At the top, visitors can look forward to a restaurant and stunning views across the fjord as far as the Jostedal Glacier, which is the biggest on the European mainland. The Loen Skylift features a strongly overhanging tower standing on two feet and anchored back with a tie bar. To simplify work during the construction phase, a road connection was specially built to the top terminal. This had the advantage of minimizing the number of times that helicopter transport was required and reducing the dependence on weather conditions.