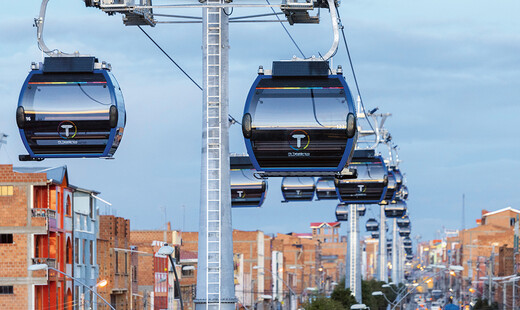 Following in the footsteps of the three ropeway lines which have linked the Bolivian cities of La Paz and El Alto since 2014, the opening of the Línea Azul (blue line) in March 2017 heralds the second phase in the creation of what is to date the biggest urban ropeway network worldwide. The new blue line lies entirely in El Alto and is directly linked to the existing Línea Roja (red line). This means that additional districts of El Alto are now connected with La Paz. The Línea Azul extends the public ropeway network by almost five kilometers and includes five new stations. The through travel system enables passengers to ride along the entire stretch from the first to the last station without having to change along the way. The route crosses the biggest street market in Latin America as well as linking UPEA to the ropeway network, making it a key means of public transport for the citizens of El Alto and La Paz.

A special method was used to install the rope for both sections of the new line: Two Vorarlberg pilots steered the drone, which was specially developed for Doppelmayr and carried an auxiliary rope to the required destination. The auxiliary rope was then used by the ropeway specialists from Doppelmayr/Garaventa to install the actual rope for the lift. The drone employed is known as an octocopter: If one of its motors should fail, the other seven motors allow the drone to be flown without any problem. Thanks to its compact size and flexible use, a drone is particularly well suited to deployments in urban areas.