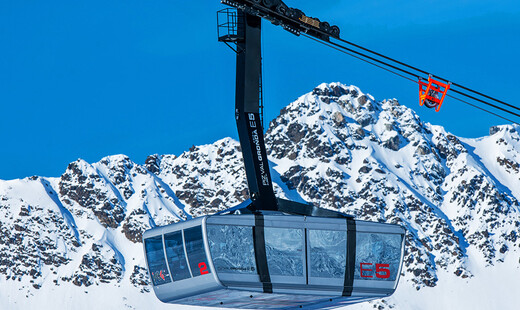 In Ischgl, a world first went into service for the winter season 2013/2014. The Piz Val Gronda is the world’s first reversible aerial tramway to be fitted with heated seats. But that is just one of the numerous exceptional features on this tramway from Doppelmayr/Garaventa.

The 150-passenger cabins are particularly striking. In comparison with other tramways, the cabin design has been literally turned on its head. The elegant looks cannot fail to impress as Ischgl’s color concept is unmistakable. Even the machinery room has been completed in the typical Ischgl colors.

The decision to build an aerial tramway was primarily motivated by a desire to preserve the landscape and protect the natural environment. The line is very space-saving and the station buildings are also styled in a very inconspicuous and open design.