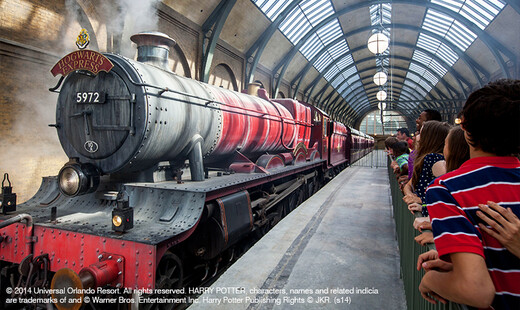 Universal Orlando Resort has a brand new attraction: the Hogwarts Express. Hiding behind the detailed reproduction of the renowned steam train from the Harry Potter films is a modern funicular ropeway from Doppelmayr/Garaventa equipped with best-in-class entertainment systems. The Hogwarts Express consists of a steam locomotive, a coal wagon and three passenger carriages and connects Universal’s Islands of Adventure with Universal Studios Florida. During the four-minute ride, it offers passengers a very special experience just like the one Harry Potter and his friends had on their way from King‘s Cross Station in London to Hogsmeade. In building the Hogwarts Express, the design engineers entered into new territory. The very tight curve radii, the significant weight of the train (overall length around 70 meters) and high rope tension all posed special challenges which were mastered with flying colors.

Theme Park Insider, an online guide to the world’s most popular theme parks written by the consumers themselves, awarded the Hogwarts Express first place in the category "Best Family Rides in America".