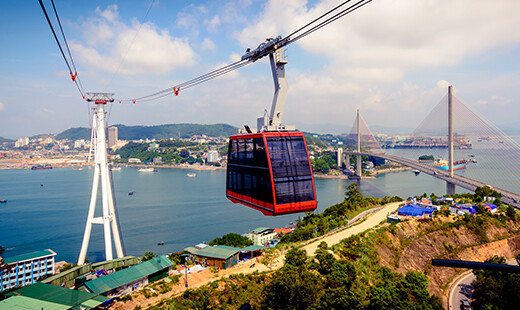 Attracting over six million visitors a year, Ha Long Bay ranks among the most well-known tourist attractions in Vietnam and is also a popular destination for the local population. In addition to its new theme park, the area is a UNESCO World Heritage Site with 1,600 islands and islets that form a spectacular seascape of limestone pillars. With the new tramway, Doppelmayr/Garaventa has simultaneously broken two world records. The two double-decker carriers, each built to carry 230 passengers, are the biggest aerial tramway cabins anywhere in the world to date. Traveling at a speed of ten meters per second, the Ha Long Queen Cable Car can carry around 2,000 passengers an hour. The steel ropes are supported by two towers, one of which is the world’s tallest ropeway tower rising up to a height of 188.88 meters. Passengers enjoy breathtaking views of the unique natural scenery.

Installing the ropes was a particular challenge. As Ha Long Bay plays a major role in cargo shipping with large vessels, the entire rope installation operation had to be performed at a height of 50 meters above sea level. The equipment used included a rope pulling machine with a tractive force of 65 tons and a rope braking machine with a braking force of over 60 tons. The reversible aerial tramway experts from Garaventa were the key players in this project.