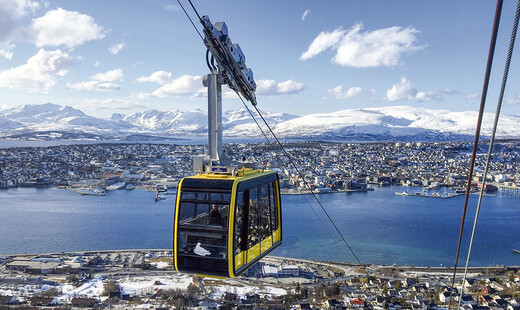 The reversible aerial tramway in the Norwegian city of Tromsø is regarded as the northernmost passenger ropeway in the world. It was opened in 1961 by the shipping company Brødrene Jakobsens Rederi, which played a pioneering role in Norwegian business and in the fishing industry, and was instrumental in developing the infrastructure in the region around Tromsø. Today, Tromsø is a flourishing city with growing numbers of visitors who come to enjoy the fascination of the northern lights on the Fjellheisen.

The modernization process began in 2012 when Garaventa was addressed to review the 45-year-old installation. Their report showed that the tramway had reached its end of lifetime, so the decision was made to renew the tramway – one of the most popular sights in Tromsø. The companies Fjellheisen, Fjellbygg and Garaventa worked closely together to conquer all challenges. The time frame for the construction was very tight and the work in winter 2015/2016 was performed during the 24-hour darkness period, which occurs in the north of Norway. The snow, wind and icy temperatures were also challenges that the tramway specialists mastered with excellence. Like the original cabins, the new ones carry the two symbols of the Jakobsen shipping company: the seal and the polar bear.