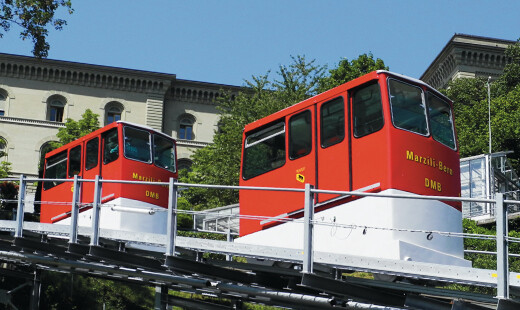 Since 1885, the Marzilibahn has provided the shortest way of getting from Bern railroad station to the River Aare and the Marzilibad swimming facility. The funicular is an integral part of the Bernese cityscape and, thanks to its great popularity and the short route, carries over one million passengers a year.

Top comfort awaits passengers. The Marzilibahn is now barrier-free and visitors can enjoy wider doors, which were part of the cabin refurbishment. The optimized passenger flows have positively impacted capacity and user numbers.

The funicular track is located on an unstable slope and had become distorted over the years. As part of the overhaul, the track infrastructure, which was built as a steel bridge construction, was completely replaced and the specialists from Garaventa also realigned the track. To meet the requirements for public transport systems, the entire lower terminal was also replaced.

Up until 1974, the Marzilibahn was a watercounterbalanced system – at the top terminal, a tank underneath the passenger compartment was filled with 3,500 liters of water from the local stream known as the Stadtbach. The heavier top cabin then descends, pulling the bottom cabin up the hill. The funicular was electrified in 1979. The original cabins are still in existence: One is set up near the lower terminal, while the other is on show at the Swiss Museum of Transport in Lucerne.