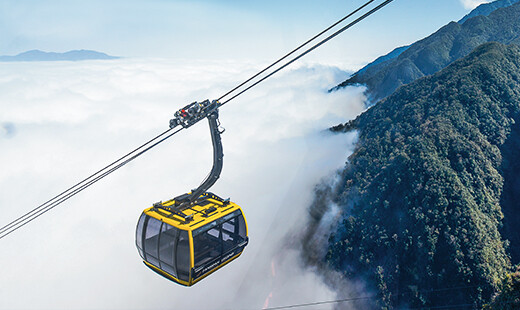 At 3,143 m, Mount Fansipan ranks as Vietnam’s highest peak and is seen as an important destination for the country’s inhabitants. The arduous ascent can take several days as it involves hiking through jungle region with steep terrain in parts. Since February 2016, a spectacular 3S lift supplied by Doppelmayr/Garaventa has provided access to a high plateau near the summit. Now, even less accomplished hikers are able to fulfill their dream of visiting the “Roof of Indochina” once in their lives. During their trip on the 6,326-meter-long ropeway, which barely takes 15 minutes, passengers cover 1,410 vertical meters. This makes the Fansipan Legend 3S lift currently the world’s longest tricable ropeway with the greatest vertical rise. Both of these records were confirmed by representatives from Guinness World Records.