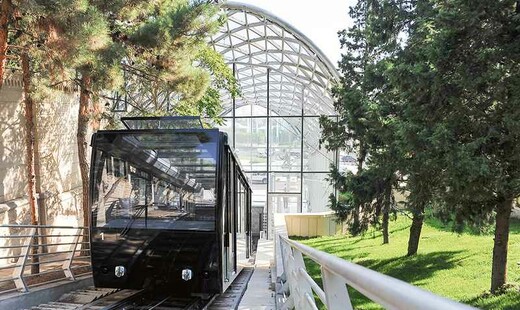 Originally built in the 1960s, the funicular links the fashionable Baku Boulevard in the old part of the city with a modern residential and business quarter located on a hill above. The upper terminal is situated in front of Flame Towers, a futuristic high-rise complex consisting of three 190 m towers near the parliament building. The lower terminal is barely a ten-minute walk from National Flag Square and Crystal Hall, which hosted the Eurovision Song Contest 2012, on the shores of the Caspian Sea.

The funicular is well frequented as it provides a practical means of transport for commuters and visitors alike. The upper terminal offers a fantastic view of the city and the sea. And the entire installation is particularly attractive, from the impressive curved design of the stations and the neat route up the wooded hillside to the shining cabins in a glossy black and silver finish.

The funicular has undergone a complete overhaul. Only the curved alignment remains; the haul ropes are held on the track by compression sheaves. Even the old Russian sleepers were replaced with new ones from Switzerland. Hallmark Swiss and Austrian quality is evident all the way through the installation. The funicular was supplied by Garaventa, the cabins by CWA; the architect and the engineering for the steel-glass structures for the stations as well as the glass elements are from Austria. The time frame for the overhaul was just ten months from signing the contract. Thanks to the excellent collaboration between Garaventa and the local contractors the project was delivered without a hitch.