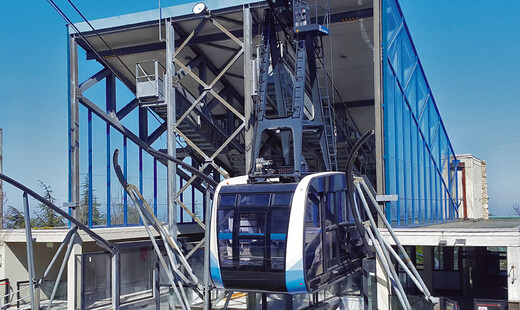 Since the spring, residents and visitors to Europe’s third smallest country – after Vatican City and Monaco – have been able to enjoy traveling in comfort while taking in the astounding scenery. San Marino, which covers an area of just 60 square kilometers, offers guests magnificent 360°-views from the cabins of its aerial tram. The upgrade of the “Funivia di San Marino” was accomplished within an extremely short time frame. The upper and lower terminals have been refurbished, all equipment assemblies overhauled, a completely new electrical control system installed and the existing cabins replaced by new ones with panoramic windows and info screens.

Monte Titano, which belongs to the eastern spurs of the Apennines, is regarded as the defining symbol of the micronation. An aerial tramway has linked Borgo Maggiore at the foot of the mountain with the historic center higher up since 1959. Doppelmayr already carried out a complete modernization of the installation back in 1995, which included the supply of new cabins to hold 50 people as well as the installation of twin track ropes. Now, 22 years later, the San Marino ropeway once again impresses with cutting-edge technology.