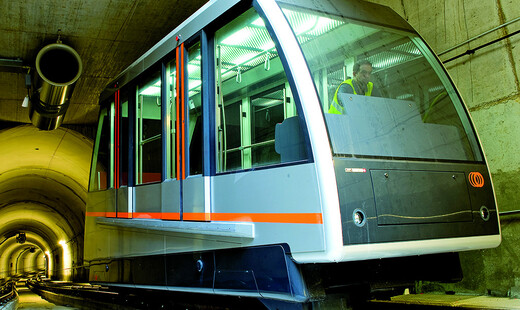 Bilbao is one of the largest cities in northern Spain, with a metropolitan area of almost one million inhabitants. Santurtzi has a population of 50,000 and lies on the coast at the end of Bilbao’s subway system, the “Metro”. The new funicular connects the higherlying urban districts with the Metro.

The Metro is a very popular means of transport. Some 275,000 passengers use it on a daily basis. What makes it so appealing is the way in which service frequency is rapidly adapted in line with actual demand. The same applies to the new funicular. The train service runs according to a fixed schedule. Nonetheless, the cabin departs once it is 80 percent full as occupancy is automatically counted. The next cabin is then put into service shortly afterwards.

The funicular runs underground. To ensure maximum availability, there are two parallel, independent tracks. The drives of the two cabins are independent of one another. Automatic rail lubrication ensures silencing as well as reduced wear. Thanks to the mono-wheel carriages, it has been possible to save weight and therefore drive energy.