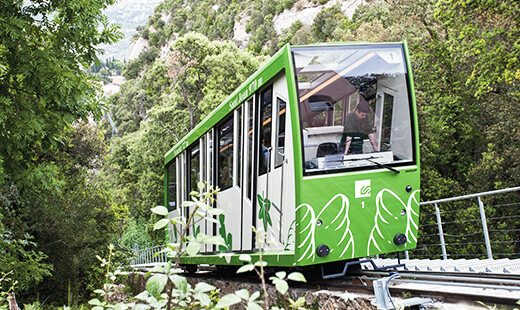 Doppelmayr/Garaventa designed new cabins for a 90-year-old funicular in Barcelona. The modernized funicular railway Sant Joan–Montserrat opened on Montserrat in Barcelona, in the Spanish province of Catalonia, at the end of May 2015. It brings visitors and hikers from the monastery at the foot of Montserrat Mountain to the summit at an elevation of 1,000 m. The view of the monastery, Catalonia and the Pyrenees is unique. The challenge in implementing this project was adapting the new cabins to the clearance envelope of the existing alignment dating back to 1926 with its 65-percent gradient, and then bringing them into position. The cabins, which weighed almost nine tons, were carried over a distance of 50 meters using a 300-ton mobile crane and then set down on the track. The Installation is being modernized in two phases: In phase 1, the ropeway specialists from Doppelmayr/Garaventa delivered two completely new funicular railway cabins including a new control system and hydraulics. By 2017, the funicular will be equipped with a new drive in phase 2.