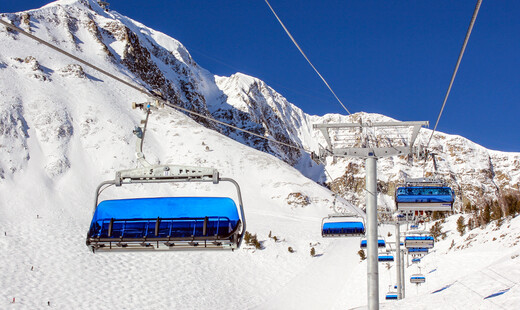 Big Sky Resort, Montana, is home to America’s Biggest Skiing® and Base Camp to Yellowstone National Park. The ski resort operators are currently working with Doppelmayr on a major expansion aimed at enhanced comfort for guests. The new 6-seater chairlift Powder Seeker is the region’s first installation to feature bubbles and seat heating. It replaces a triple chairlift and since December 2016 has been carrying guests to the Lone Peak Tram, which was built by Doppelmayr back in 1996. In addition to the new 6-seater chairlift, Doppelmayr also installed the new Challenger triple chairlift in 2016, which also transports people up the Lone Peak Mountain where skiers can access some of the best terrain that Big Sky has to offer.

Soil conditions posed the biggest challenge during construction of the new ropeways as the alignments cross glacier moraines, which called for special foundations. This made the installation work more demanding than usual. The construction materials had to be flown by helicopter to the top station and the crews could only reach the construction sites higher up the mountain on foot. Despite the exceptional conditions, Doppelmayr was able to meet the tight time frame of just eight months and completed both chairlifts on schedule.