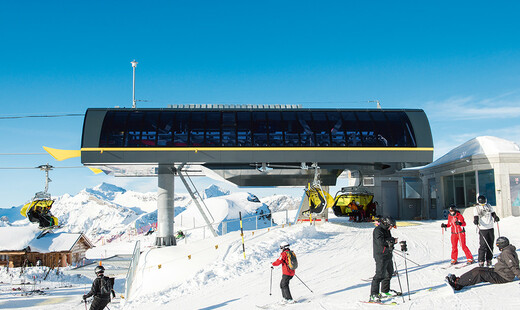 Jungfraubahnen replaced their Wixi-Lauberhornschulter chairlift with a 6-CLD-B from Doppelmayr in 2012. This has increased transport capacity by one third.

The new 6-seater chairlift replaces a double originally built in 1964 and modernized in 1992. It ranks among the lifts with the best capacity utilization in the region. As well as cutting down on long waiting times by significantly increasing transport capacity, construction of the 6-seater chairlift with bubbles has also addressed the higher comfort expectations of the guests.

This lift is the first in Switzerland with a DSD (Doppelmayr Sector Drive). The DSD system is quieter and more energy- efficient than conventional drives. Marco Luggen of Jungfraubahn AG is keen to point out another special feature: "The ropeway automatically adjusts its speed according to passenger volume. Line speed is controlled by the passenger flow recognition at the turnstiles in the bottom station."