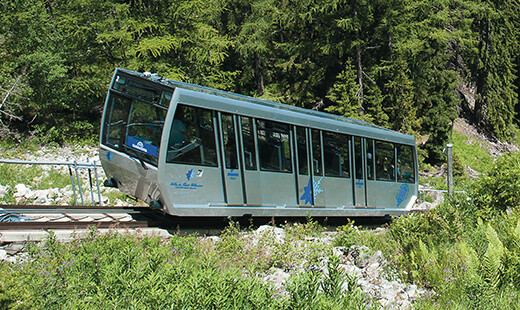 The VerticAlp Emosson nature park in the canton of Valais is home to the Châtelard funicular railway, built in 1920, which has undergone a complete technical overhaul performed by Doppelmayr/Garaventa. As the installation is included in the Swiss Inventory of Ropeways – a list of installations of particular cultural, historical or technical importance – preservation as well as technical aspects had to be considered for the rebuild project.

In order to maintain the original route dating back to 1920, with its exceptionally demanding alignment and large differences in gradient, Doppelmayr/Garaventa developed some unique technical solutions specifically designed for this funicular. The ropeway experts replaced the entire electro-mechanical equipment on the installation. The new brake system does away with the need to include a ballast carrier as counterweight. Another new feature is the two attractive cabins with panoramic roofs, which make the ride even more enjoyable for local users and tourists. The funicular was originally used as a means of transport for workers and materials during the construction of the Barberine dam.