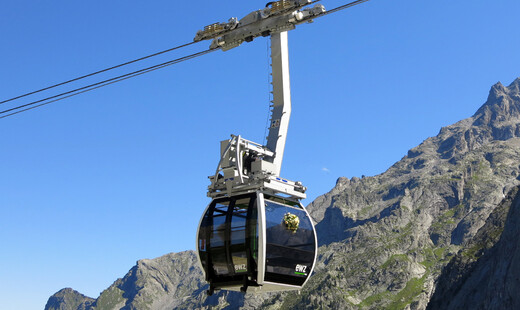 The new aerial tramway in Bergell is an unusual project because it simultaneously serves two purposes. It not only provides company transport for the Bergell power company, but also carries tourists. The tramway operates 24/7/365 and therefore has to provide maximum availability. A specially developed quick-change coupling allows the tramway to be readily converted from a material transport system for heavy loads of up to 5,000 kg into a passenger tramway within a short space of time. That is essential for Bergell’s tourism sector because the view from the Albigna dam is quite spectacular.

Due to the fact that the tramway is indispensable for operation of the Bergell power station, the interruption of tramway operations had to be minimized. Doppelmayr/Garaventa was able to complete the work in just four months. The Albigna tramway has an integrated recovery concept with two emergency drives.