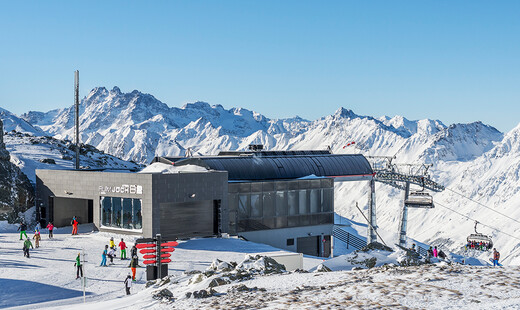 A trip on the new Flimjoch lift promises to be a special experience. The 24-year-old Flimjoch lift was the absolute transport king of all the lifts operated by Silvrettaseilbahn AG. By the end of the winter season 2015/2016, it had made almost 30 million trips. Since December 2016, it has been replaced by an 8-seater chairlift from Doppelmayr.

The top station of the new lift has two exits – one on the eastern side and one on the northern side. This was done to address the issue of changing wind conditions on the ridge. Depending on the wind situation, either the eastern or northern exit can be opened – an improvement in comfort that should not be underestimated. Another special feature is the tower number 3. It is an intersection tower and consequently part of two 8-seater chairlifts: the Höllboden lift and the Flimjoch lift. With up to 6,900 passengers an hour, it ranks as one of the towers with the highest passenger flows worldwide.