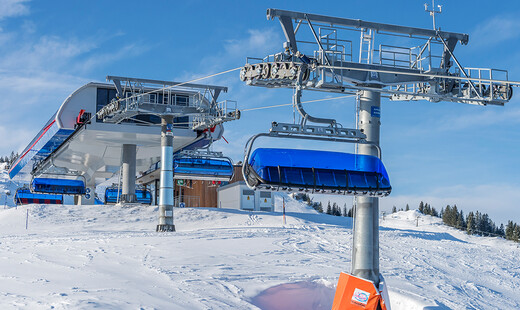 Sudelfeld, with its 31 kilometers of expansive ski trails offering all levels of difficulty, ranks among the biggest ski areas in Bavaria. In order to also be one of the most modern, the ski area near Bayrischzell has been investing extensively in the creation of an up-to-the-minute winter sports experience. Following the construction of the new 6-seater Waldkopf chairlift in 2014, another chairlift was built in collaboration with Doppelmayr and opened at the end of 2017. With a speed of 6.0 meters per second, the new Sudelfeldkopf lift is one of the fastest detachable chairlifts in Germany. It replaces three surface lifts and in future will provide a fast and safe means of reaching the upper section of Sudelfeld not only for winter sports enthusiasts but also for hikers.